In the fire station

Every day I try to explore and try to sketch places that represent the city in some way. St. John's buildings are made in wood. Fires happens very often in the city. Therefore the fire department is a very important institution here. I have never had draw fire fighters before, I didn't know what to expect when I first approach the fire station and ask if I can draw them. I got a very interesting tour were most of my questions were answer. I had to confess I used to have many stereotypes about firefighters, I though that their uniforms were red for example (here they are dark blue). I also asked one of the fire fighters if they got calls to fetch cats from threes, he said: " yes, but we don't go there, we tell the people that the cat will come down by himself when becomes hungry." " And what if the people insist?" I asked. The guy answered: "Well, I then ask them if they've ever seen a cat's skeleton on a three" 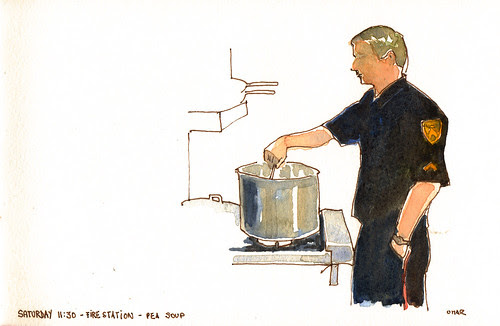 The fire fighters in St . John's have many duties and traditions. On Saturdays they have always pea soup and one of the fire fighters is in charge of cooking it. I have never seen somebody to cook in such a martial way. I had never tasted pea soup before, so they invited to eat with them. The soup was great. (While he was cooking the alarm rang, he turned off the heat and went to his car. He came back 20 minutes later , it was a false alarm)
Posted by omar at 4:05 AM