That is the headline today in German Newspapers: Guido Westerwelle is dead. He was a German politician from the FDP Party. He became foreign minister and vice chancellor between 2009-2013 during the previous Merkel government. 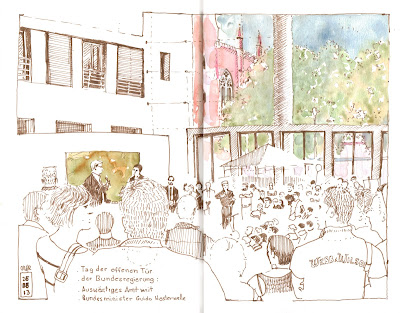 I draw him 2013 during an "open door" day at the Foreign Affairs Building. He was there talking to the public, without any knowledge about his leukemia. A year later after he retired from politics, he got the diagnostic after doing some tests for a minor operation. What shock me about his death, is that he was young and he was suppose to start a new life, and from nowhere he got this illness. He was just 54. It could happen to me, it could happen to anybody. R.I.P
Posted by omar at 8:40 AM 4 comments