On the morning I walked along the promenade to visit the Gateway of India. That beautiful structure built  as an arriving point for boat passengers, was ironically the place chosen by the British troops   when they left forever the subcontinent after  many years of colonial rule.


The light at that early hour was magnificent enough to convince me to seat far away to my destiny to do a watercolor. From my point I view I could see the Gateway of India on the right and the Taj Mahal Hotel on the left (the one that suffered the bombings) But my main subject was, as I mentioned before, the light.

When I just had started doing the first washes, a small crowd started forming around me. One of the guys, an Omani, leaned on the wall to watch too. He had such an elegant presence and with that turban it was perfect for my image that immediately  included  him on my painting. I am very proud to say that I got his face very well, and the enthusiastic approval of my public confirmed that. 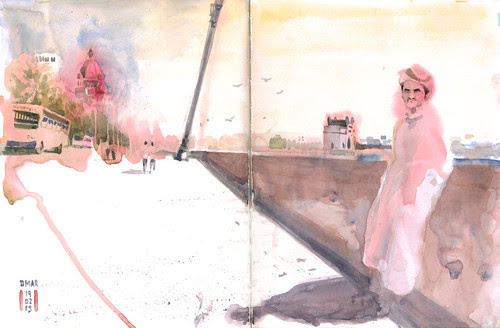 The scale of the building is impressive as the image below shows. It is decorated with a mix of Indian and British elements. A similar architecture you could find in most of the buildings of the Colaba area, therefore is very popular  by tourists. 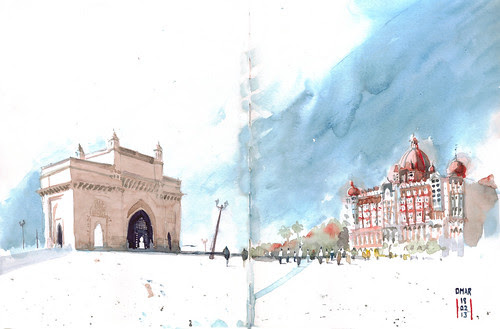 I played around many times with that motive. Lots of people visit the place. It is a magnificent background for any people studies. 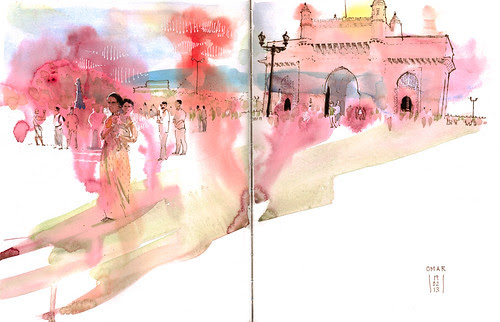