Many cities in India got two names. There is the colonial name and there is a new name based in  historic or the phonetic similarities with the old name. Important is that the new name is an Indian name. Problematic is that old names resist to be forgotten. So you are forced to deal with maps and signs with two different names all the time..

We went south from Fort Kochi heading for the Backwaters. Alleppey is a city in the coast. Channels crossed the city  and connected to the hinterland. 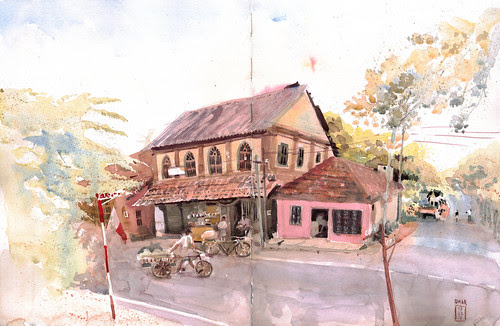 The city still keeps a traditional architecture architecture . Modernity has not yet destroy the city identity. We visited the India Coffee House. An institution in Kerala. The one we visit had a beautiful old interior decorated with many photos of Indian political leaders. The waiters wear some traditional clothes with a colorful decoration in their hats.

The markets are full of spices. The sellers got more and more prepare for the tourist.This guy Sanel could praise his goods in 4 languages.(English , German, French and Spanish)  I asked how he learned and he said talking to the tourists
. 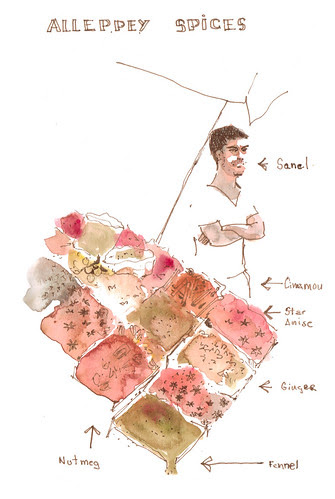 In Kerala the communist party has  always been very strong. Therefore the state doesn't have much industrie  The constant strike had scared possible investors. On the other hand their analphabetism is almost 1%. Most of the money come from people working in the Gulf countries and now the increase of tourism also offers a new economical income.
Posted by omar at 2:13 AM