The fortuneteller and other stories

When I was walking through the streets of Ooty, I met this guy. He works a fortuneteller. I saw many of them  the streets but this guy was quite popular.  His age and experience provided him with the necessary confidence and skills to win the trust of his clients.

It was a fascinating thing to watch. First there was a talk. Then the woman  mixed the deck of cards. The parrot was locked out of its golden cage with some seeds. Then the bird picked up a card. The images in it would reveal the future of the woman.  The guy would explain to her in a kind manner the meaning of the card, asking constantly questions and watching carefully her expressions. She will nod some times of approval. At some point the guy threw some shells probably to check one of her questions. the figure the shells made would be the answer. 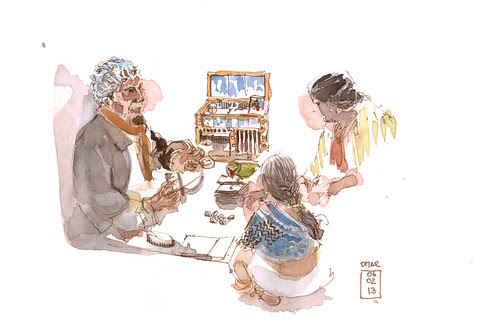 Later on I walked to the station. I was looking for information about the bus to my next destination. I saw a Korean girl drawing some people at the fence. I though wow! another Sketcher. I wanted to talk to her so I approached her but she was very concentrated in her drawing. So I picked up my sketchbook and I started drawing too. Then we exchanged a few words while sketching. By the time a crowd had gathered around us to watch us drawing. At some point she left when I was in the middle of my drawing. You can see in the drawing that some people very discretely get into the picture, like the guy with suit on the right, or enthusiastically  asked me to draw them like the two friends on the left.

Like in  most of the places I visit in India, the people wanted to see my sketch books and took pictures. I was always treated very friendly and with respect.
Posted by omar at 4:51 AM